John C. Mozena is a marketing and communications professional who brings decades of private-sector experience to the fight for liberty and free markets.

He is the president and a member of the board of directors of the Center for Economic Accountability, a nonprofit education and advocacy organization bringing accountability and transparency to state and local economic development policy across the United States.

In addition to his work with the CEA, he also continues to serve as a marketing and communications consultant and contractor for nonprofit and private-sector organizations.

Before founding the CEA, John was the vice president for marketing and communications at the Mackinac Center for Public Policy. In that role, he directed outreach that communicated the Mackinac Center’s solutions to state and local policy questions to key audiences, improving the quality of life for all Michigan residents. His team’s work influenced public opinion so that policymakers were encouraged to act in the broad public interest rather than narrow private or government interests and advanced the organization toward its goal of “liberty and opportunity for all people” by promoting free-market policies and challenging governmental overreach. 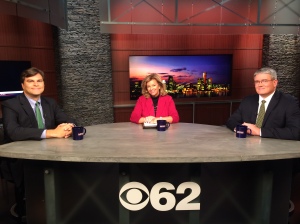 He joined the Mackinac Center in 2016 after a 20-year private sector career developing and executing strategic communications campaigns for public, private, governmental and nonprofit organizations of all sizes. His clients ranged from some of the world’s largest corporations to small nonprofits and entrepreneurial startups; from beloved consumer-facing brands to national industry trade associations. (Notable examples include Microsoft, General Motors, the American Iron & Steel Institute, the American Red Cross, Carhartt and eBay.)

Before moving into public relations and marketing, John began his professional career as a print reporter and editor covering Michigan’s health care industry. He specialized in policy topics and was a credentialed member of the Michigan House and Senate press corps.

He holds an accreditation in public relations (APR) from the Public Relations Society of America and certifications in disaster public affairs from the American Red Cross, for whom he has volunteered as a disaster public affairs specialist and Disaster Action Team leader. He is also a graduate of the Atlas Network’s Atlas Leadership Academy, including its Think Tank Leadership Training program, and a participant in the American Enterprise Institute’s Leadership Network.

John’s experience with advocacy dates back to the beginnings of the Internet boom, when he was a co-founder, board member and public relations lead of the Coalition Against Unsolicited Commercial Email (CAUCE), an Internet-based coalition of users and systems administrators working toward market-based solutions to junk e-mail. In this role, he dramatically increased awareness among multiple constituencies of problems created by “spam”, including consumers, marketers, legislators and regulators. As the lead spokesperson for CAUCE, he was interviewed by the Wall Street Journal, The New York Times, Newsweek, Wired, NPR, PBS, CNN, CNBC, MSNBC, CBS Radio, Fox News Channel, BBC and more than 100 other newspapers, magazines, television and radio programs and other outlets on issues including junk e-mail, Internet marketing and privacy.